Let's face it, if you are interested in ukuleles then you are probably (even if it's just a little bit) weird.  Ukulele players are like the Shriners of the music world.  We have these tiny little instruments and we like to have fun and maybe goof off a little bit.

Well, maybe you embody all of those characteristics but you don't actually know how to play ukulele.  Maybe you'd like to just play the part a little bit?  Or, maybe you are a competent player and you want the challenge of a novelty or toy ukulele?  I mean, some toy ukuleles can be almost unplayable, but therein lies the challenge, right?  I mean, what if you are able to pull off some hot "Tiptoe Through the Tulip" licks on a plastic smurf ukulele?  That's pretty much a trophy-worthy feat, if you ask me.

So, for you goofballs out there, here's some pretty hilarious toy and souvenir ukuleles that are on ebay right now.

The Strummin Smurf!  Ahhh yeah!  Solid.. um... plastic with a blue finish (duh!).  It features Smurfette and whatever the name was of the smurf who played the Lute.  If you are (or were) the "weird kid" in high school, then you need this uke.  Just think of how great it will go with your trench coat.  😉  When I was wearing my undertaker's suit coat and doing yo-yo tricks in 11th grade, I would have killed for this instrument. 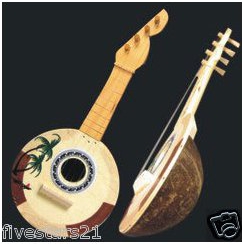 That's right, folks!  A Ukulele made out of a coconut.  Although, I think it might be more of a decoration than anything.  I mean, look at that action!  The freaking strings are almost a half inch off of the neck.  Still, just think how bad-ass you'd look if you could actually play this beast.  Heh. 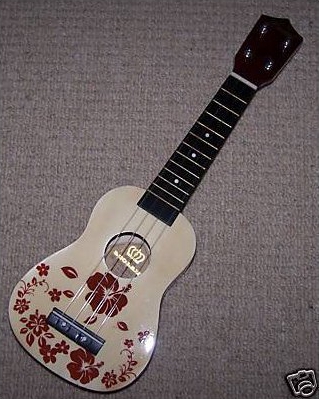 Alright... I live in Montana.  So, to me, Hawaii is a magical fantasy land where you don't freeze to death and you don't worry about bears destroying your compost pile.  Ahh.. heaven.  I've never been to Hawaii but something tells me that the first thing you see in the hotel gift shop is a plastic ukulele resembling the one above.  Heck, I bet your aunt and uncle have one of these in their closet already.  In fact, it's how I got started on ukulele.  My mother-in-law had a very similar souvenir ukulele that I spent hours on, trying to figure out why I couldn't play it correctly.  Turns out, it was impossible to tune.  But, if you want to just look the part, then this little guy is adequate.